Eduard Thöny was born in Brixen, South Tyrol on 9 February 1866. He studied at the academy in Munich and was trained as a drawer and painter. He gained fame as a cartoonist for the magazine "Simplizissimus", which was founded in Munich in 1896.
He designed c. 2500 sheets over the years, on which he accurately depicted contemporary society and military. The satire revealed itself sometimes only in combination with the comments - Thöny's art is excellent genre painting. In 1904 Eduard Thöny travelled together with Ludwig Thoma and Rudolf Wilke along the Mediterranean: Marseilles, Algiers, Tunis, Naples and Rome were on their route.
The appreciation of Thöny's works decreased in an undeserved way with the decline of the social relevance of "Simplizissimus". Nevertheless the art professor's works found their way into the graphic collections of museums in his lifetime.
Eduard Thöny died in Holzhausen on the Ammersee on 26. July 1950. 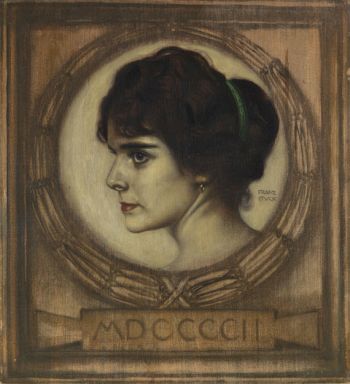 Would you like to sell a work by Eduard Thöny?